Dr Pillay’s expertise is taking the world by storm!

The first article focused on Botox for men:

“The New York Times recently published a research study stating that botulinum toxin and other non-cosmetic procedures are apparently
being used more and more by men. A growing number of middle-aged men are reportedly ‘freezing’ their faces with botulinum toxin injections and having their love handles nipped and tucked too.

According to The Daily Mail, doctors at the Harley Medical Group in London have seen a 57% rise in male botulinum toxin injections and 5,200 consultations with men in the last year. This comes after a survey published by Men’s Health magazine earlier this year, which found that a whopping 40% of men would
consider having cosmetic work done.”

“Negative pressure wound therapy (NPWT) has been adopted by numerous surgical disciplines, some even suggesting that it forms part of the reconstructive ladder. It has become one of the most successful forms of wound therapy in recent decades. In fact, the second and third most frequently cited papers in plastic surgery literature in the
last 50 years are studies on NPWT. Its rapid acceptance by physicians the world over is contrasted by the slow progress researchers are making in elucidating its mechanism of action.

Numerous theories have been proposed, many of which are supported by peer-reviewed publications. However, there is a considerable amount of conflicting evidence among these studies, and, as such, researchers continue to try and understand the workings of this revolutionary therapy. The findings in the previous chapters have elucidated some of the potential causes for the conflicting findings. This study aims to investigate the potential influences that manufacturer may have on the outcomes of studies relating to NPWT, as an additional confounding factor to the slow progress in understanding the mechanisms of its action.”
The Wembley MediSpa is proud of our internationally renowned Aesthetic Doctor! 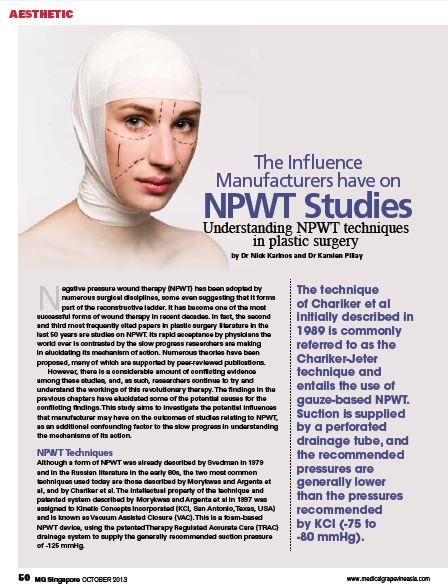