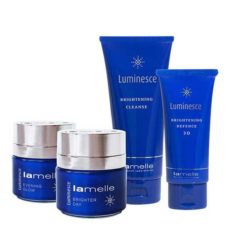 The Lamelle Luminesce range is one of the world’s most advanced pigmentation ranges and the first-ever product range to use bio-mimicking peptides. Combined with conventional skin-brightening ingredients. This scientific formulation inhibits the production of pigmentation. Safe to use on all skin types, Luminesce has no harmful effects and inhibits eight steps in the primary pigmentation production pathway.

Luminesce Evening Glow contains the same amount of pigment-inhibiting peptide as Brighter Day, but here it is combined with retinol (vitamin A) and other exfoliating ingredients in a slightly richer formulation. It’s designed to inhibit the production of excess pigmentation while also activating the natural exfoliation processes of cells that already contain melanin. In this way, a vast improvement is achieved in curbing hyperpigmentation. After cleansing the skin, apply one pump to the face, neck and décolleté. Only to be used at NIGHT TIME. STOP the product three nights before and five nights after in-salon peels or invasive treatments. Even though there was no significant increase in retinoid levels in the blood of fertile females using the product – it has not been tested during pregnancy. For this reason, we would not suggest that it’s used when pregnant. Skin might become dry initially, but this will resolve as skin cell turnover is activated.

The newly updated Luminesce Brighter Day provides even more pigment-inhibiting action. The new formulation delivers more ingredients to the cells (melanocytes) that are over-stimulated, to influence the overproduction of melanin without the risk of injury or damage.

Added powerful antioxidants (including glutathione reductase) better protect the cells and their nuclei, to prevent sun-induced pigment production and worsening. These active ingredients, combined with gene inhibition and ingredients that soothe skin irritation have been formulated into a medium-light cream that penetrates beautifully into the skin, making it ideal to use with your broad-spectrum Brighter Defence SPF 30.

Brighter Defence 30 is a sunscreen specifically produced for skin with hyperpigmentation. Sunlight is known to further darken pigmented skin, which is why sunscreen is perhaps the most important skincare product to use when treating hyperpigmentation. Brighter Defence isn’t oily. It has a matte effect on the skin – but won’t give it a grey tinge. It has also been designed for daily use when you engage in activities that require your skin to be exposed to sunlight. Remember that even when you are not actively lying in the sun tanning, your skin is still exposed to vast amounts of sunlight – while driving in a car, watching or participating in a sport or lunching outside – and it will all damage your skin and worsen your pigmentation. No ordinary sunscreen, Brighter Defence 30 contains a special form of vitamin C called MAP, which provides protection against free radicals while keeping the production of melanin (skin pigment) in check. Brighter Defence 30 also contains some pigment-inhibiting peptides. The product is designed to wear under make-up and over moisturisers.

Luminesce Brightening Cleanse is a soap-free foaming cleanser that thoroughly yet gently cleanses the skin. It contains pigment-inhibiting peptides that are designed to become trapped inside the skin during cleansing, from where they initiate the inhibition process. The mallow and peppermint extracts in this cleanser soften and tone your skin, while yarrow and lemon balm extracts calm and soothe irritated skin. Wet your face with warm water and lather a small amount of the gel into moistened hands. Massage gently in circular motions across the entire face, neck and décolleté. Rinse thoroughly and pat the skin dry. Can be used morning and evening. 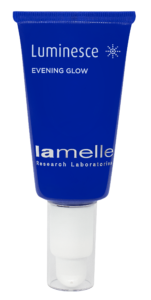 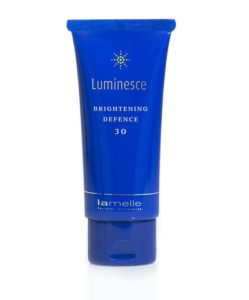